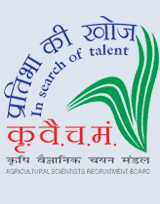 Call for application/nomination for the post of Chairperson, Agricultural Scientists Recruitment Board (ASRB), Department of Agricultural Research & Education (DARE)

List of applicants being called for interview for the post of Deputy Director General (Agricultural Education) ICAR Hqrs., New Delhi (Advt. No. 01/2021, Item No. 03)

Postponement of AO and F&AO Examination-2021

Profiles of Chairman and Members of the ASRB

A First class academic throughout his career, Dr Chakrabarty conducted pioneering research on Molecular basis of plant-pathogen interaction and signal transduction of disease resistance for five years in the USA. He completed his post-doctoral research at the University of Florida, Gainesville and at the University of Missouri-Columbia in Columbia, USA. He visited 25 countries in Australia, Africa, Asia, Americas and Europe as visiting Scientist and also led Indian delegations in various International fora.

He is the recipient of a number of academic and professional awards and Fellowships. He has been the President of the Indian Society of Mycology & Plant Pathology, Udaipur consecutively for two terms from 2017-2019. He has been elected as the President of the Indian Phytopathological Society, New Delhi for 2019-2021. He is Fellow of a number of prestigious Professional Societies including, National Academy of Agricultural Sciences, Maharashtra Academy of Sciences; Phytopathological Society of India, Indian Society of Mycology and Plant Pathology; Mycological Society of India, etc. He is also an adjunct faculty of the University of Florida, USA.

He has published 73 gene sequences in GenBank. He is also a lifetime member of 5 professional Societies and has published 76 research papers in National and international Journals of repute, written 18 book chapters and 53 conference papers. He has guided 12 MSc and PhD students.

In addition to serving ICAR for over three decades, he has served on several inter-ministerial and inter departmental bodies:

Dr. KK Singh obtained his Master of Technology (Processing & Agril. Structures) degree from Punjab Agricultural University, Ludhiana in 1985 and Ph.D. from the Indian Institute of Technology, Kharagpur in 1997. Started his career as Assistant Professor at RAU, Pusa in August, 1984 and continued until May, 1985, thereafter, joined Central Institute of Agricultural Engineering, Bhopal as Scientist S-1 (ARS-1985) in May, 1986 and worked at different positions until April, 2007 before joining as Head, Food Grains & Oilseeds Processing Division at the Central Institute of Post Harvest Engineering & Technology, Ludhiana. Before joining the post of the Director, ICAR-Central Institute of Agricultural Engineering, Bhopal, Dr. Singh worked as Assistant Director General (Process Engineering) at ICAR HQ, New Delhi. Dr. Singh has made original contributions on the application of cryogenics in food processing for retention of aroma in spice grinding establishing an internationally recognized school of thought in CRYOGENIC GRINDING OF SPICES, an area little explored until now in India or abroad. He developed a commercial scale cryogenic grinder for spices, puffed potato cubes, a novel ready-to-eat product and designed a number of need based food processing machines like, small capacity dryer for fruits and vegetables, potato peeler and slicer, power operated peanut sheller, expanding pitch type fruit grader, potato pulper for extraction of starch, etc. Some of these machines have been helpful in reducing the drudgery and enhance efficiency of operations, and have been adopted by the small scale processors/farmers.

Dr. Singh has in his credit about 100 research publications in the journals of repute and he is co-author of a popular text book entitled ‘Unit Operations of Agricultural Processing’. He has been recipient of several prestigious awards and honours, such as Rafi Ahmed Kidwai Award, Jawaharlal Nehru Award, Fellowships of the National Academy of Agricultural Sciences (NAAS), Recognition Award of the NAAS, Fellowship of the Indian Society of Agricultural Engineers, and best poster awards. He was awarded Post Doctoral Fellowship/Visiting Scientist in 2000 by the North Dakota State University, USA. He completed the management programme on ‘Leadership for the 21st Century’ organized by Harvard University, USA. He visited USA, Italy, Germany, Philippines, Thailand, China, Vietnam, and Combodia a number of times to lead the Indian Delegation and attend meetings of the Intrenational Organization for Standardization and United States Agencies, like Food and Agriculture Organization, Centre for Sustainable Agricultural Mechanization (CSAM), Economic and Social Commission for Asia and the Pacific (ESCAP), etc.

All Rights Reserved @www.asrb.org.in | Application Development and Maintenance by Cyfuture